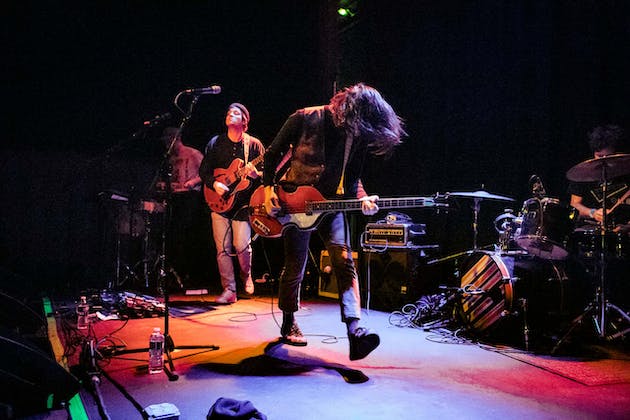 Montreal rock act Corridor opened their tour at Rough Trade in Brooklyn last week with an incredibly dynamic set that fused the best of their latest album Junior with a healthy dose of live spectacle. It was their first time headlining a venue as large as Rough Trade in New York, and it wasn't difficult to see why they've has ascended as quickly as they have. Corridor's music presents a fresh new angle in the crowded field of indie rock, taking genres as disparate as 60s psychedelia and 80s post-punk and combining them into a sunny, accessible package. Their live set takes all of their best qualities and amplifies them, transforming Corridor from a quirky indie act to a bona fide rock'n'roll band that could stand with the best of the 70s. The band's layered guitars reverberated through Rough Trade while dual percussionists added levels of rhythm and intensity not found on Junior. Bassist and frontman Dominic Berthiaume was the energetic centerpiece of the set, headbanging and dashing around the stage during heavier tracks and performing softer ones delicately but passionately. Corridor's tour continues through the Southern US and Europe over the next few months and they definitely shouldn't be missed.

Listen to Junior on Spotify and check out photos from the set below: