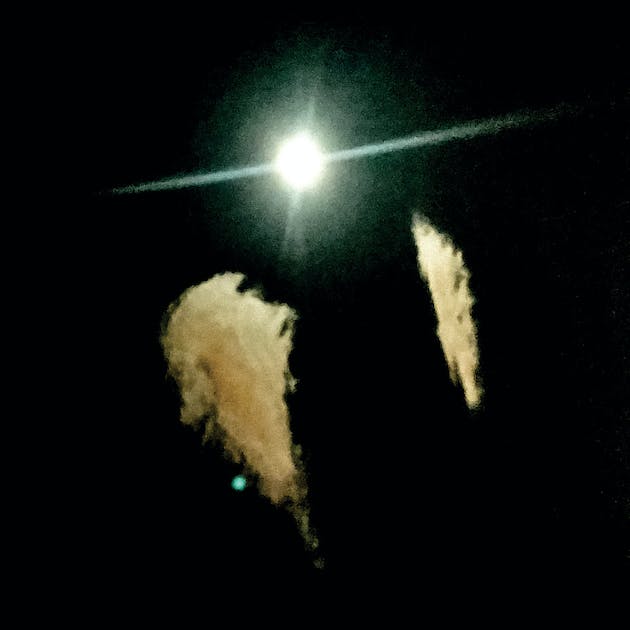 It’s pretty easy at a time like this to look around and decide that the world must be ending.  Actually, it’s not all that difficult any time to take a step back, let it all sink in, and find ample evidence that things really must be wrapping up any day now.  History often feels like just a list of crises, getting longer by the hour, and yet here we all still are. Despite our own best efforts, we always seem to figure it out in the end.  Midwife, the self-described “Heaven Metal” project of Denver multi-instrumentalist Madeline Johnston, delivers timeless, post-apocalyptic pop music for the modern age, and Forever, their newest album, could not have arrived at a more opportune moment.

Spacious, ominous, reverberant, and weirdly lovely, the album’s 6 tracks often feel like siren songs drifting across a wasteland.  This album doesn’t give you room to breathe, it gives you the space to stretch out and lay down on the floor.  Sparsely populated with gentle, fuzzed-out guitars, echoing vocals, and the occasional drum machine, Forever clearly has nothing to hide and nowhere to hide it anyway.  Though inspired by the unexpected death of Colin Ward, artist and close friend of Johnston, these songs strike a delicate balance between grief and hope that feels as if they could go anywhere and fit right in.  Forever is not so much music for the end of the world, but music for after the world has already ended, and we’re all left to ask, “now what?”

“2018,” the album’s opening track, says it all in a few lines.  “This is really happening/ to me” and “Get the fuck away from me/ 2018.”  These two sentences make up the entire lyrical content of the song, spread out and repeated over three verses.  Grief stricken, despairing, and quietly cathartic, the song pairs nicely with its successor, “Anyone Can Play Guitar.”  Fuzzy, gently chugging power chords over a simple, steady drum loop push the song along through its cyclical, cynical, and borderline nihilistic lyrics.  “Vow,” a spare and beautiful instrumental piece, serves as a turning point. In “Language,” anger gives way to an acceptance that, however sad, feels like a triumph in itself.  After repeating the same refrain four times over, the song culminates in one simple statement, “I will never forget you,” stretched out across the entire final stanza. “C.R.F.W.” follows, beginning with a recording of Ward himself reading a poem.  “Death is not violent,” he says. “If you asked a leaf on a tree in autumn if it is scared to fall off the branch, it will say ‘I have given all I am to this tree, and I am tired, and I’ll float on down now.’”

By far the most upbeat song on the record, “S.W.I.M.” provides the perfect closing chapter to an album so run through with grief.   No longer confronting her emotions, Johnston now embraces them, and in doing so finds herself on the other side. Beginning with huge, ringing chords and kicking into a driving, vibrant rock song, “S.W.I.M.” somehow feels like a U2 hit garbled through an old transistor radio, but in the best way possible.  Though it maintains all the sonic hallmarks of the rest of the album, it leads them in a new direction characterized not by its grief, but by its hope. This is a song of world-wise optimism, one that has known pain but has found hope and happiness despite it all. Forever is an album that begs for things to go back to normal, and “S.W.I.M.” is the light at the end of the tunnel, the confirmation that, when all is said and done, things will be okay in the end.  When my life is over and the credits start to roll, I hope it sounds something like this.

Listen to Forever on Bandcamp: