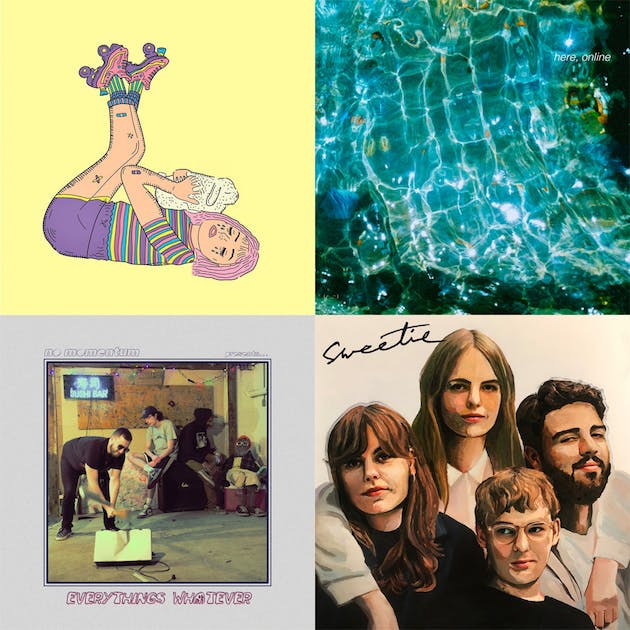 Indie-punks can now breathe a collective sigh of relief, because Florida’s Worst Party Ever has blessed us with new, heart-wrenching, mind-racing, pulse-raising tunes. Encompassing just five tracks (two of them being remakes), here, online is a small but mighty offering to WPE’s ever-growing fanbase. On energetic opener “Cross Country,” the trio trade in tired text communications for some much needed solitude. here, online is raw, honest, and guaranteed to make you feel everything and nothing all at once. For 12 gripping minutes, the listener is brought along a very personal journey filled with melodic chords and metaphoric lyricisms. It’s a story of growth, redemption and advancement in a world that often wants the latter for you. Vocalist Andrew Schueneman holds nothing back with this release, and we’re all the better for it. Worst Party Ever is a party I’m happy to have attended. Listen on Spotify. -Sarah Masessa

From the diary of Lili Trifilio straight into your feels comes Beach Bunny’s long awaited debut full-length album, Honeymoon. Breezy power pop, simple hooks as sticky as Malört—set to lyrics as bitter as a shot of the nasty stuff to boot—and Trifilio’s soaring pop diva voice have built the band a rabid fanbase over the course of several fantastic EPs, and rightfully so. Trifilio has always had an innate sense of where to take a song next, like when the arpeggiated guitars of “Rearview” skate into scratchy accompaniment before bowing out in a blazing full-band chorus. The twee Obama-era indie rock of “Colorblind” recalls the better sides of Born Ruffians or Two Door Cinema Club. But it’s on single “Dream Boy” where the band really hits their stride. All the uncertainty and second-guessing of what comes next baked into a line like “You’ve got my heart bursting at the seams / Maybe you’re the boy from my dreams” reads like a Beach Bunny thesis statement—sunny harmonies and all. But for all her boy troubles, it’s Trifilio who gets the last laugh every time. Ghost her, string her along, or break her heart—she’ll be on stage every night, living her dream, while hundreds of people shout her side of the story back at her in affirmation. Listen on Spotify. -Reid Flynn

I’ll be honest, the first thing that drew to the four-piece Swedish indie band was their absolutely perfect moniker. After diving deeper into their discography, I was pleased to discover that they sound rad as hell, too. Their debut LP, Sweetie, is a shimmering dream-pop masterpiece. The album's 12 tracks are packed with delightfully soothing melodies pure enough to even get your average stick-in-the-mud to bop their head and crack a smile. In its simplest sense, this is music created to make you feel good. And it does just that. Listen on Spotify. -Sarah Masessa

Tame Impala album drops are akin to an audio engineer's Christmas, Hannukah, and Kwanzaa all wrapped into one holiday. Far are we from the days of hip modern psychedelic pioneer Tame Impala that inspired dozens of imitators—we are now fully entrenched in the Max Martin aspiring days of the band—featuring albums of Kevin's sonic sandcastles built by placing each grain of sand in it's place with a set of tweezers. Although a bit corny at times lyrically, the cleanliness of mixing and the dynamic range present on The Slow Rush make it an absolute musical joy ride. Listen on Spotify. -David McDevitt

no momentum - everything's whatever

If your ears are aching for some quality, lo-fi emo goodness, might I suggest the debut LP from Poughkeepsie, New York trio no momentum? The 10 songs that encompass everything’s whatever are incredibly dynamic sing-along tracks — simultaneously emphatic (perfect to listen to with friends on a long car ride), and reflective (ideal for solo listening during a quiet weekend in). The point is, there’s something for everyone on the new record — from the loners to the extroverts, you will relate to, and find solace in, its intricate orchestration. On standout track “painted yellow lines” vocalist Will Bowman sings of the self-doubt and worry that often plagues him, “I’m fucking trying / But when anything goes wrong / I feel like crying.” You and me both, Will. everything’s whatever is dynamic new-wave emo for a generation just looking for some peace of mind. Listen on Spotify. -Sarah Masessa