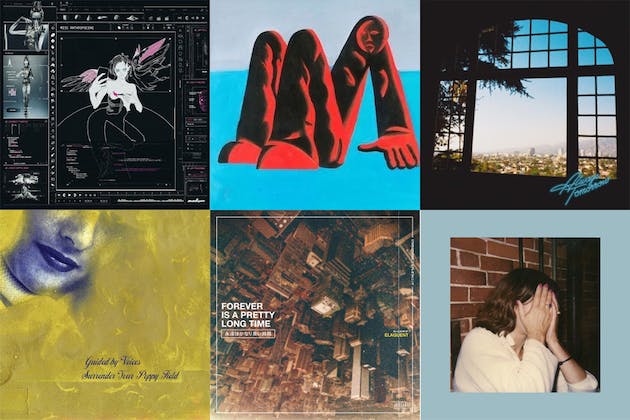 Four-piece indie rock outfit Tosser offer up an impressive debut with the release of Total Restraint — as jittery riffs, gritty rhythms and transcendental melodies lay the foundation for some hallucinatory bliss. Isn’t that what a quality rock album is supposed to do for its listeners, anyway? Provide an escape from the mundanity of everyday life with satisfying arrangements and a rush of chaotically beautiful noise? Ultimately, the Washington, D.C. quartet knows how to make distorted basement grunge resonate, long after you’ve finished listening. On heavy-hitting track “Wishful Thinking,” vocalist Eric Zidar grapples with racing thoughts, self-doubt, and, unsurprisingly, wishful thinking, to try and salvage a shitty situation. With lyrics like “Maybe it’s wishful thinking / Maybe it’s in my dreams,” empathy is woven throughout this woozy track, engulfed in a soft warmth. By the end of Total Restraint’s 11 tracks, the listener feels very well embedded into Zidar’s earnest quest for belonging. And that’s the uniting thread woven throughout DIY — we can all acknowledge and appreciate the journey. Listen on Spotify. -Sarah Masessa

On Forever Is A Pretty Long Time, veteran Ontario producer Elaquent recruits an array of talented underground rappers to add a whole new layer to his typical instrumental beats. The result is a lush and varied album that combines kaleidoscopic soul and jazz samples, chill drum beats, and both rap and sung R&B vocals. It’s impressive in both its diversity and cohesion, showcasing Elaquent as not only an expert producer, but a curator as well. Listen on Spotify. -Camden Phalen

"Grimes finds a whole new way to make climate change fun" was the headline of an article in The Guardian doing it's damndest to try and knock Grimes' artistic output down a peg. Valid challenges one may have with her work aside, the grandiose statement the article was making were meant to appeal to the demographic that stands by the fact that "Peter Frampton just gets better with age." They don't get the modern zeitgeist and now they have their words backing it up. With the proper lens — and that's not to imply some incredible leap of logic, more so the basic nuance that a consumer will engage an artist with — Grimes' latest LP, Miss Anthropocene, is an incredible achievement. She takes on a persona to display the novel concept of the true villain in an era of climate change — less focused on deliberate evil actions and more so on celebrating apathy when faced with catastrophe -—partying in the prolonged warmer weather rather than recognizing it as a cause for alarm. The environment created around Grimes' villain builds out to be an astonishing album — spacious, self-aware, critical, and lusciously produced. It's a challenging LP and worth a thoughtful listen. Listen on Spotify. -David McDevitt

Indie-rock champions Guided by Voices concoct a beautifully colorful story within the 15 tracks that comprise Surrender Your Poppy Field. The Ohio-based figureheads of old school cool are both genuine lyrical wordsmiths and compelling instrumentalists — certainly a powerful combination. Standout track “Volcano” feels like an ode to Sonic Youth, with its dreamlike progressions and psychedelic tone. Fuzzy guitars and drone-like vocals make for an easy listen, and a fun look into the mind of lead singer and songwriter Robert Pollard. After an eventful 2019 where Guided by Voices dropped an astonishing three LPs, Surrender Your Poppy Field is a very much welcomed palette cleanser. Listen on Spotify. -Sarah Masessa

Archy Marshall's third album as King Krule subtly expands his sound in both directions, combining a heavy, punk-influenced front-half with a back that’s as dark and melancholy as ever. It’s an emotionally complex project, written mostly in Marshall’s final days in London, but released after he moved out of the city and became a father. While not as immediately bold a statement as 2017’s The Ooz, Man Alive! is tight, concise, and packed with vivid atmosphere, unique production, and of course, Marshall’s unmistakable voice. Listen on Spotify. -Camden Phalen

Never lazy, rarely crazy—Bethany Cosentino & Bobb Bruno return with their fourth album as Best Coast. Always Tomorrow is a pleasant look at overcoming songwriter’s block replete with neoprene production and neat little guitar flourishes tucked deep in the mix. Cosentino—once the target of largely sexist stereotyping and unfair comparisons to ex-boyfriend Nathan Williams of Wavves—does a strong job of owning the sunny niche she envisions for the band without falling into cliches. On “Everything Has Changed,” Cosentino gives a knowing middle finger to past jabs at her lyrics, retorting that critics “Used to say that I was lazy / A lazy, crazy baby / Did they think / That maybe I was in on it?” Damn straight. Listen on Spotify. -Reid Flynn