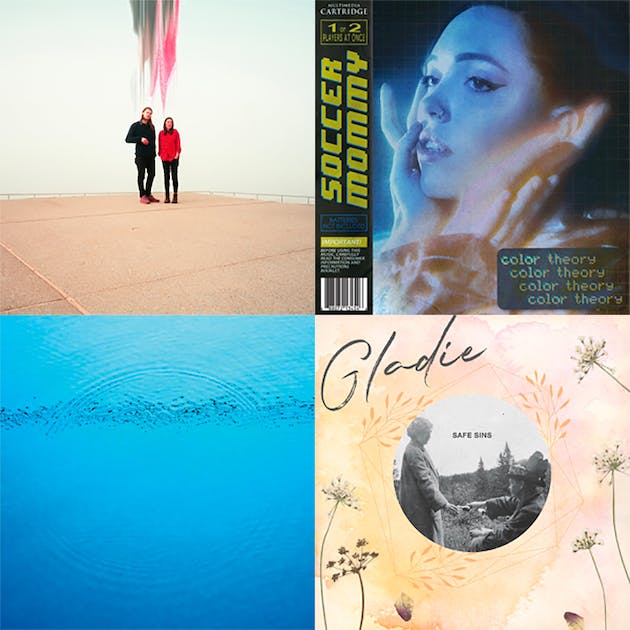 Safe Sins is the debut LP from Philly’s Gladie, and I was certainly looking forward to this release — especially because I was left heartbroken when Cayetana (the former band of lead singer Augusta Koch) broke up in late 2019. If Cayetana was Koch’s gritty and anthemic “fuck you” to those that have wronged her, then Gladie showcases Koch maturing and learning from these experiences. My personal favorite track, “Twenty Twenty” feels comparable to the Cayetana tune “Busy Brain,” as Koch once again fights anxiety and self-doubt in a less-than-lovely society. With hazy synths, soothing vocal melodies, and tranquil guitar chords, Koch and Matt Schimelfenig navigate their places in the world, and trudge forward despite life’s many curveballs. It’s an album bursting with themes of redemption and inner solace, and these messages are most definitely amplified and emphatically felt with dynamic rhythms and elegant instrumental gusts. Listen on Spotify. -Sarah Masessa

Koichi Yamanoha's latest album as Grimm Grimm is warm, intimate, and incredibly sonically diverse. On Ginormous, Yamanoha builds own cohesive sound from a range of dream pop, shoegaze, baroque pop, and folk influences. He balances conflicting emotions masterfully, ultimately creating, in his words, an album that sounds “like a funeral and a wedding at the same time." Listen on Spotify. -Camden Phalen

When Ratboys released the lead single from third album, Printer’s Devil, one could presume that the Chicago-based band was moving further from their twee alt-country origins into something louder and more tambourine-shakingly distinctly 2000s indie rock. A full listen to Printer’s Devil quickly dispels this notion. While the moonshot and ambitious “Alien With a Sleep Mask On” starts the album off in positively camcorder vision, the changes of pace down the unexpected avenues that follow feel so refreshing. “My Hands Grow” is a pleasantly stoned, blustery autumnal harvest shuffle that asks the big questions about the little things, concluding that “The tall grass, it hides whole civilizations bugs design.” A sweet reminder to never lose sight of the things you wondered about as a kid when the world seemed huge and unknown. AOID had the infectious melodies, and GN had the attention of music critics far and wide, but Printer’s Devil is where Julia Steiner & Dave Sagan really stretch their legs and show that they have range. Listen on Spotify. -Reid Flynn

"I'd like to thank Soccer Mommy for the music." Bernie Sanders' unfazed demeanor thanking the band for playing at his Houston rally is everything I aspired to be in 2016 when the first EPs of Sophie Allison's band started to pop into my radar. The moment was perfect because it felt as if we were all watching the punchline of a joke years in the making not land. You form a band, name it something that can cause a bit of a spine shiver without going full death metal - we want just a touch of cringe enough to make someone's parents shudder when talking about you to a coworker. Make incredible music and gather momentum to break out of the small venue circuit onto larger stages — and as you hit these larger stages you can revel in the joy of watching old men have to read your name off a piece of paper and try to smile through it. It's all for the bit — and a vehicle to make incredible music. Soccer Mommy's 2018 LP Clean floats to the top in a pool of their peers — it's a grit-inspired pushback against the world around Allison that shows incredible intimacy and warmth. It's perseverant and soothing and an incredible full length debut by the band. color theory can push Soccer Mommy out even further into the world — with their growth as more ambitious songwriters and a more concrete live unit the album can serve as a stepping stone to take another swing at the ultimate punchline. Listen to Spotify. -David McDevitt

With sounds ranging from dizzying psychedelic folktronica to smooth, atmospheric house music, Dan Snaith is an artist that refuses to make the same album twice. On Suddenly, his first album as Caribou in nearly 6 years, he continues to push his sound forward, pulling the best from his previous worth and fusing it with layers of euphoric synths and samples. Suddenly may be his most dancefloor-friendly project yet, taking traditional pop and house progressions and wrapping them in the studio wizardry and off-kilter songwriting he’s become a master of over the past 15 years. It’s at once a deeply personal, somber, bright, and uplifting album, and it’s easily one of his best. Listen on Spotify. -Camden Phalen