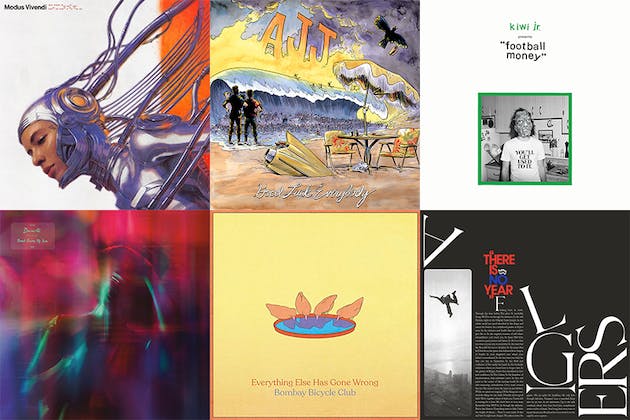 In 2016, 070 Shake signed with her childhood idol Kanye West’s label G.O.O.D. music. Two years later, on sole ye standout “Ghost Town," she overshadowed him on his own album. Following a string of excellent singles in 2019, her full length debut Modus Vivendi is finally here. If what we’ve heard so far is any indication, Modus Vivendi will cement 070 Shake as an artist more than worthy of the hype she’s garnered. Expect a dark, lushly produced album that pairs her distinctively emotive bars with the same urgent, soaring vocals you heard on her G.O.O.D music features. Listen on Spotify. - Camden Phalen

Bombay Bicycle Club - Everything Else Has Gone Wrong

A lot can happen in the five or so years Bombay Bicycle Club has been away on hiatus. A few new iPhone models are announced, the brands started to say “on fleek,” and [checks notes on politics] nope… looks like nothing changed in politics at all, that’s for sure. Thankfully, the perennially underrated indie band is back to shake our blues loose, with what may be their catchiest album to date. Everything Else Has Gone Wrong, their fifth, is steadied by lead single “Eat, Sleep, Wake (Nothing But You),” a fizzy lovedrunk picture book, which may very well be A Perfect Pop Song. The song begins with a Garden State-esque sharing of headphones, charges through a chorus lead by an ascendant guitar trill, and in-between demands “Will the song never end?” set to a teenage feelings sampler of “Us on the bed / Half a meter apart / Awkward hearts beating faster and faster.” Welcome back, lads. Listen on Spotify. - Reid Flynn

Arizonian folk-punks AJJ have always been rather outspoken — tackling delicate topics like mental health and religion with wit and humor. On Good Luck Everybody, the band’s first full-length release since 2016’s The Bible 2, they handle the virulent political climate of today with their signature energetic lyricism. The band masterfully juxtapose the album’s austere theme with light and easy-spoken melodies. Standout track “Normalization Blues” is infused with bluegrass undertones, as frontman Sean Bonnette notes that our outrage pertaining to the current White House happenings have merely shifted to a “dull, despondent sadness." Bonnette doesn’t shy away from his hatred of Trump, describing him as the “weapon of the evil men who really run the show.” Politically charged and brimming with punk angst, it takes us into an election year with thought-provoking prose. Good luck everybody, 2020 is going to be quiet the ride. Listen on Spotify. - Sarah Masessa

Toronto’s Kiwi Jr. takes the punchy, groovy punk music of bands like Parquet Courts, covers it with layers of warmth, and injects it with as many hooks as they can possibly fit. Their debut Football Money follows three effortlessly catchy singles that’d make as much sense on a beach playlist as they would a workout playlist. While their approach may initially sound straightforward, Kiwi Jr find something new and unique in embracing the familiar, and Football Money is a record you’ll likely immediately connect with and enjoy. Listen on Spotify. - Camden Phalen

Algiers - There Is No Year

Algiers' sound can best be labelled as a noisy blend of dense industrial rock and blues. On each of their past two albums, their sound has been dominated by tossing the soulful cries of lead singer Franklin Fisher into the ring with charred bass lines and cracking drums that could be found in a Nine Inch Nails track. Their politically charged self-titled debut album could serve as the sounds that institutions who have wronged others hear as those who have they have wronged come charging back towards them. The first single off There is No Year, the spoken mantra slammed over the grind of jazz horns in the background most reminiscent of Kendrick Lamar's curtain raiser "For Free," calls out the concept of misdirected politics aiming at identity of institutions and situational factors. Algiers seem to be setting up for their finest work yet. Listen on Spotify. - David McDevitt

Post-rock veteran Matthew Doty's debut album at Deserta is heavy, resonant, and beautiful. Drawing inspiration from the upcoming birth of his first child, Doty spills his excitement for the unknown over seven sprawling tracks that evoke the shoegaze greats of the 80s and 90s. Deep synths and layers of distorted, reverberant guitars build into massive, mesmerizing waves of sound. Doty’s vocals float dreamily and effortlessly at the top, submersing themself into the waves at just the right moments. It’s a sound that viscerally depicts transition, and it’s one that will engulf you if you let it. Listen on Spotify. - Camden Phalen