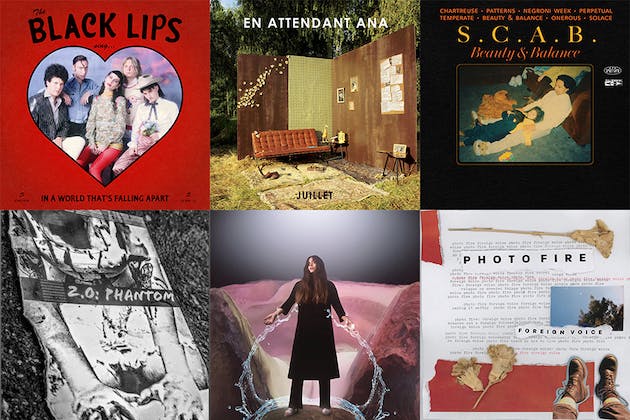 Navigating life after loss is exhausting, but the experience can be mitigated when you have the tranquil sounds of Florida-based indie-rock outlet Photo Fire to keep you company. The band’s new release, Foreign Voice, is bursting with ethereal melodies that run parallel to introspective lyrics. There’s a prominent ache felt throughout all 12 tracks, earnestly met with brief and unsuspecting glimmers of hope. Standout track “Careful Now” addresses standing tall in the wake of life’s many adversities. Vocalist Hunter Walker soberly croons, “you don’t have to be so easy / no one has to be this easy / to pin down knock around.” This particular DIY group is worthy of recognition large enough to rival its significant number of band members — I’m hooked. Listen on Spotify. -Sarah Masessa

It can be mystifying—trying to make sense of how you can be so hard on yourself, while someone who seems to be going through something objectively worse can remain so supportive of you. Brooklyn-based post-punk band S.C.A.B.’s sincere and often heartbreaking debut album, Beauty & Balance, grapples with this very reckoning of the subjective way we process suffering. With the dizzying mania of Preoccupations, and the juicy guitar ebb of early-‘10s Captured Tracks bands, S.C.A.B. traces a path of squiggly bewilderment through a prolonged experience with the illness and loss of a loved one. Told largely in chronological order, singer/guitarist Sean Camargo—along with guitarist Cory Best, bassist Alec Alabado, and drummer Brandon Hafetz—flogs kinetically through the stages of grief. With washed out, distant vocals, propulsive baselines, and smooth, twisting fretwork, the songs on Beauty & Balance feel appropriately like we’re inside Camargo’s mind, as one thousand different thoughts curl and spiderweb across one another in crisis. A lesson he learned from his late father, Camargo proves that it isn’t so much beauty and balance, but that the beauty lies within balance. Listen on Spotify. -Reid Flynn

Through a series of excellent singles over the past two years, Copenhagen-based artist Molina has established herself as one of the best and most interesting new voices in pop music today. Her music is dark, icy, and shapeshifting, combining stark and often minimalistic synth-based soundscapes with layered, echoing vocals. Molina is a remarkably talented singer and producer, but her greatest strength lies in her songwriting ability, where she demonstrates an impressive ability to take frequent left turns while maintaining a sense of pop sheen. Her debut EP, Vanilla Shell, is out today, and is a must-listen. Listen on Spotify. -Camden Phalen

2.0: Phantom, the debut album from Ohio-based experimental artist (leave) nelson b, remixes the songs of fellow Lonely Ghost artists into a funky pool of rhythmic sound. The eight-track LP features airy and soothing remixes of tunes from lo-fi emo fixtures such as Winnebago Vacation and Father of the Year. Every sample is an elegant ode to each respective artist, but the true beauty lies within his masterful ability to alter the songs into something truly all his own. Standout track “How Some” is a cathartic release of emotions, complete with sprightly snaps and dreamy melodies. All in all, 2.0: Phantom is a spectacular debut from an adept artist with a very bright future ahead. Listen on Spotify. -Sarah Masessa

Paris indie pop act En Attendant Ana’s second album is lo-fi, sun-soaked trip through life’s transitions. Juillet takes 80s punk inspired sounds that wouldn’t be out of place on a Joy Division or Sonic Youth album and dresses them up with modern DIY aesthetics, sharp catchy hooks, and dreamy vocals from front person Margaux Bouchaudon. The result is an album that confidently carves its own unique space and has no trouble standing out in today's crowded indie rock field. Listen on Spotify. -Camden Phalen

Throughout their more than two-decade-long career, these four boisterous boys have played everything from garage-tinged punk-rock to psychedelic soul. But their latest release, Sing In A World That’s Falling Apart, proves the quartet have found their way back to their country roots. Exhibiting a jaded front against the world around them, Black Lips’ sound shares an uncanny resemblance to folksy-blues figureheads Johnny Cash and fellow Atlanta-grown performer Jerry Reed. It’s a delightfully fun and easy listen. With lyrics like, “this old middle finger / has grown fat and tired / from flicking the bird,” what’s not to like? Listen on Spotify. -Sarah Masessa