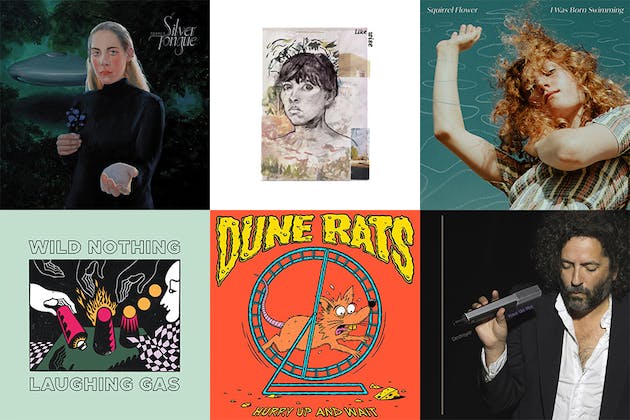 Squirrel Flower - I Was Born Swimming

Ella O’Connor Williams delivers on every bit of promise she’s build up over the past few years on I Was Born Swimming, her debut full-length as Squirrel Flower. It’s an emotional, nostalgic, and Americana-tinged folk rock record that brings somber, atmospheric ballads and bright, fuzzy guitar riffs in equal measure. In many ways, I Was Born Swimming seems to transcend time, simultaneously feeling like an artifact from the past and a step into the future for DIY rock. Listen on Spotify. -Camden Phalen

Dune Rats - Hurry Up and Wait

These stoner buds have certainly come a long way, and what a wild ride it has been. With their 2017 release, The Kids Will Know It’s Bullshit claiming the top spot on the charts in their native Australia, the chill punk trio certainly had a lot to live up to with the release of their most recent endeavor, Hurry Up and Wait. In the (probable) words of Dune Rats, no worries, m8, because these 12 tracks are as youthful and fun as ever. On standout track “Rock Bottom,” the gang navigate life’s daily changes with wit, humor, and sunlit melodies while reminding us all to “take a walk on the wild side” once in awhile. It may be summertime Down Under, but you can get a feel for it up north as well, because Dune Rats are bringing the heat. Listen on Spotify. -Sarah Masessa

The loudspeaker has come on, the powers that be have asked the owner of The Best Voice in Indie Rock to show themselves, and Frances Quinlan has answered the call. A slackened sigh, a yelp, a growl through gritted teeth, a jagged ladder-climbing following her own complex melodies; the Hop Along frontwoman knows multitudes, and they're all on display on her first solo release in 15 years, Likewise. More subdued and tender than the songs she writes with her full band, but with the same vivid and jarring almost-Biblically ugly details that come with pure-eyed objective storytelling; Likewise drops us into parks and meals, arguments and dreams. The choking scream found cathartically on Hop Along tracks like "Well-Dressed" bares its teeth again at the rabid fixation Quinlan has on "Went to LA" that "Heaven is a second, heaven is a second... chance." The album closes out with a bedroom drum machine reinterpretation of former tour mates Built to Spill's "Carry the Zero," fitting perfectly into this perfect little gift Quinlan has given us. Listen on Spotify. -Reid Flynn

Silver Tongue carries the quiet menace of much of TORRES’s work, but also builds on it with dreamy vocals, snarls of glitched-out synth, and a certain clarity of self that has not found a comfortable home in her work before. The wholly self-produced record is a testament to place Mackenzie Scott holds as an artist, full of frenetic energy, pushing at the bounds of genre somewhere between hard driving alternative and spiky dream pop. Throughout Silver Tongue remains her most personal record, directly addressing her relationship through love and loss and infatuation. It is a journey in both sound and in content, and one that will leave you satisfied. Listen on Spotify. -Stacia Phalen

Destroyer - Have We Met

Destroyer’s twelfth album shrouds Dan Bejar ever-cryptic steam-of-consciousness lyrics with an array of vibrant synthesizers, groovy slap bass, atmospheric textures, and burning guitar solos. At times, it feels like it could be the Destroyer’s most accessible album, at others, it’s entrancing in its complexity. It’s the band’s most diverse effort yet, and one of their best. Listen on Spotify. -Camden Phalen

Jack Tatum has proven, time and time again, that he likes to step outside the box when it comes to his artistry. This rings true once more on the EP Laughing Gas, as Wild Nothing’s notable shimmery, indie-pop style takes a back seat to more of an 80’s synth-pop vibe. Track number three’s “Foyer” tells the tale of a love gone awry — a heartbreaking image that is mitigated solely by lighthearted background melodies. The overall message of the five tracks is clear; everybody needs a little bit of escapism sometimes. So loosen up, free your mind, and take in some Laughing Gas while you’re at it. Listen on Spotify. -Sarah Masessa