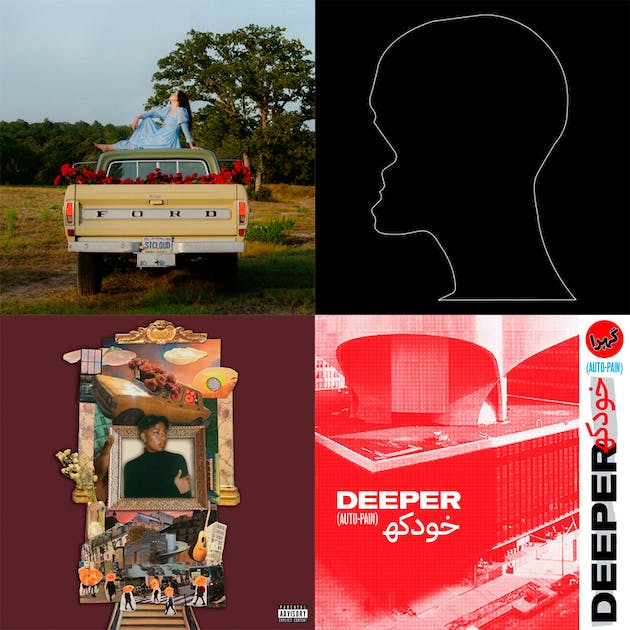 Following the loss of a former bandmate to suicide, Chicago post-punk outfit deeper confront mental health and mortality on their second LP. Auto-Pain is a dark and cohesive work of tight, anxious riffs and grooves that stand toe-to-toe with their 80s influences. In tackling an often-grim subject matter with raw, genuine emotion, Deeper persevere through their despair and find the light at the end of the tunnel. Listen on Spotify. -Camden Phalen

Orion Sun - Hold Space for Me

Following 2017's excellent A Collection of Fleeting Moments and Daydreams, Philly singer, producer, and multi instrumentalist Orion Sun returns with her debut LP. On Hold Space for Me, Orion Sun expertly merges genres as wide ranging as jazz, bedroom pop, and rap into her own unique brand of dreamy and mesmerizing lo-fi R&B. It's soothing yet haunting, familiar yet completely novel, and packed with intimate emotion. Listen on Spotify. -Camden Phalen

The watershed that has been the past three years for Nicolas Jaar finally has its final piece. Since the Chilean-American producer's last proper full length record, Sirens, we've witnessed a series of material dumps in the form of the emergence of full length albums 2012-2017 and 2017-2020 from the producer's alias Against All Logic, alongside a series of mixes for NTS Radio and others. These dumps showed incredible leaps in the ideas floating around in the producer's mind. Although exercising a more regimented and dance-driven space in these dumps separate from what was given away on Sirens, no answer was apparent as to what did not fit with the rest. These sounds and ideas are all incredible — what keeps them apart? Cenizas arrived via Twitch stream three days ago and the differences became apparent — no Jaar release of recent memory shows the depth and darkness of this album, with glitched bells and whispers tearing away at the colors surrounding it to create an album that remains at all points in transition. Listen on Spotify. -David McDevitt

Waxahatchee’s fifth full length, Saint Cloud, is a refreshing dose of music for introspective porch gatherings. Piano-tinkered openness that perfectly fills the gap where the laughter dies down so you take a sip on something cold and hear Katie Crutchfield deliver some shocking truth like “And the lilacs die / And the lilacs drank the water / Marking in the slow, slow, slow passing of time.” But it’s not an album of death, it’s an album of new beginnings, of—yes, springtime. Much has been made of Crutchfield’s sobriety (new!) and love of Lucinda Williams (longstanding!) leading up to this album, and the effects are welcome and tangible. Listening on a porch on a sunny albeit chilly day in the Northeast like today, it’s the perfect album to think fondly of the friends you can’t see right now and root for the flowers attempting to bloom—admire them even—for their quiet determination to make the most of their moment, it being not their fault that it occurs in unforgiving times. Perhaps they're lilacs. Listen on Spotify. -Reid Flynn

It’s raining. It’s always raining. They just opened a Starbucks in California. Neat. Your date likes your denim. You like your denim. They made a second Home Alone movie. The kid gets lost in New York this time. Hilarious. I hope they make a third. Bill Clinton played Elvis on Arsenio. It was cool. There’s a new Pearl Jam album. What’s this one called? Eleven? Good joke. Let’s go back to her place in Belltown and watch Law and Order. Booyah. Listen on Spotify. -David McDevitt