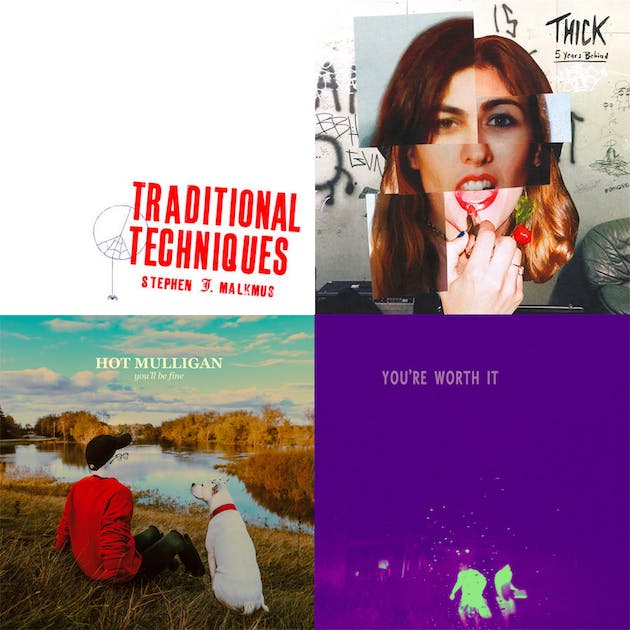 On 5 Years Behind, the Brooklyn-based trio navigate the trials and tribulations of being a twenty-something in today’s society — which translates to coming up short of what our parents, friends, and even strangers (thanks, Internet) might have expected from us. The album’s title track encapsulates this fear of failure and propensity to compare with striking accuracy, “Always five years behind / Everybody’s Expectations / That they have of my life / I wouldn’t feel so overwhelmed / If I didn’t let time take control of me.” The group’s pain and confusion is nearly palpable, due in part to swirling power chords, chaotic drums, and gripping choruses. Ultimately, THICK created an album that unites us as we step into the unknown and fight to take back control of our own lives, once and for all. Listen on Spotify. -Sarah Masessa

Hodera - You're Worth It EP

Quietly, New Jersey gut punchers Hodera went away after 2018’s Besides EP. Quietly, they have returned with the steadfast and tensely rewarding You’re Worth It EP. The four-song collection is fully self-released, with no intention of touring behind it or fomenting non-organic promotion—just art for the sake of art. While frontman Matthew Smith has shifted his focus to his excellent and vulnerable solo project, Bravely, in the interim, You’re Worth It demonstrates that the band can still bring it, explicitly for those willing to pay attention. “Eyes Wide Open” showcases Smith’s superior sense of phrasing and the same sort of intense frenetic build-ups that made 2017’s First Things First an emo twang classic for anyone who ever woke up requiring water, Advil, and forgiveness in equal measures. Listen on Spotify. -Reid Flynn

On Hot Mulligan’s sophomore album you’ll be fine, the Michigan natives navigate hardship and pain with maturity — bringing to light the beauty of supportive friends and family during trying times. The 11 tracks are clearly influenced by twinkly midwest emo, and I couldn’t be more pleased. It’s clear that the band have expanded their talents since their 2018 debut Pilot, as they build a solid math-rock foundation, but ultimately defy genres with psychedelic infused sounds and adventurous lyrics. The album is fresh, open, and personal, with seemingly every element of human emotion carefully brought in to create a cohesive whole. you’ll be fine is just that — a gentle reminder that when the going gets tough, the tough get going. Listen on Spotify. -Sarah Masessa

"Pitchfork Gives Music a 6.8" read the headline of The Onion on a (probably) overcast day in September, 2007. “In the end, though music can be brilliant at times, the whole medium comes off as derivative of Pavement.” The Onion has a lot in common with Aaron Judge — constantly swinging, striking out a bit more than normal, but when they connect, it's the most satisfying home run you'll see all day. It's been more than a decade and I'll still see that article pop up every so often — and that ceremonious dig at the way publications tote Stephen Malkmus' old project Pavement as the foundation of all things indie rock for the coming three decades was the walk-off homer of the entire article. Malkmus' life and musical outputs have moved incredibly since the dissolution of his old band — he's written and toured a number of albums with his band The Jicks including 2018's standout Sparkle Hard and he's written his own interpretation of an electronic record with last year's bewildering Groove Denied. Now is the time for Malkmus to come home — with the release of Traditional Techniques, a collection of warm, intimate, and tender folk tracks. I imagine a world where Malkmus mixes it up every few years for the next decade — and that sounds like a pretty good decade to me. Listen on Spotify. -David McDevitt