Pandemic Artist Relief: Music in the Time of Covid​-​19

Gardenhead Records' latest compilation is one of the best ways to supports independent artists during difficult times. 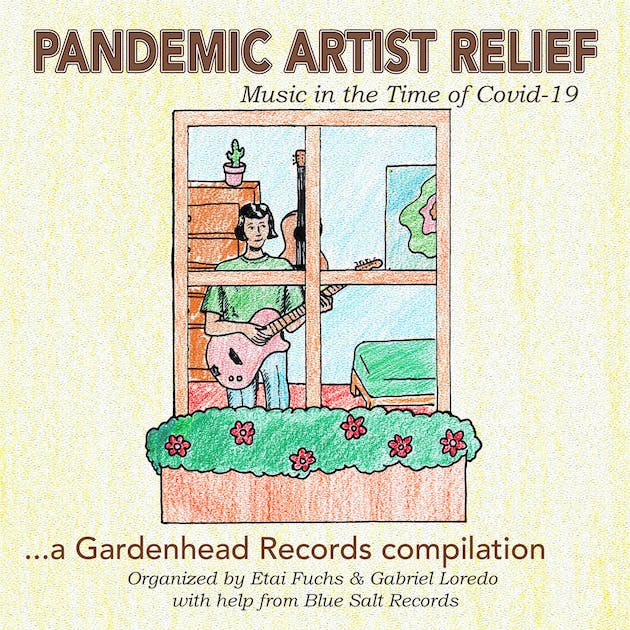 Nearly two months in, the coronavirus pandemic has caused near-complete collapse of the live music industry. Beyond the high profile tour cancellation and album postponements, independent musicians have been hit particularly hard by the crisis. Between loss of touring and wide-reaching layoffs, a huge percentage of up-and-coming musicians have found themselves without the income they need to get by. The divide between artists that struggle to get by and those lucky enough to have the resources to support themselves is clearer than it ever has been, and the need for those of the latter group to support the former is incredibly dire.

As a college student currently quarantined at his childhood home, DC artist Etai Fuchs (who records as Etai) realized that he’d been lucky enough to escape the worst effects of coronavirus. felt a responsibility to use the resources he had to help other artists in his network that have been less fortunate. The result was Pandemic Artist Relief: Music in the Time of Covid​-​19, a compilation of tracks from DIY musicians impacted by coronavirus released in collaboration between Etai’s label Gardenhead Records and tape label Blue Salt Records. The compilation features a diverse set of lo-fi folk, rock, and pop-punk, and showcases some of the year’s best and most under-appreciated musicians. All proceeds from the project go directly to the artists featured on it— it’s one of the best ways to support musicians during difficult times.

Below are some of our favorite tracks from Pandemic Artist Relief: Music in the Time of Covid​-​19

Personally, I’ve found this song to be fascinating since the Pandora algorithms started shoving it in my face everytime I wanted to listen to a station built for anybody who has ever listened to a record by The Shins. The original STRFKR track is insanely catchy and groovy, but strangely robotic, like watching robots create some sort of micro-disco track and get really good at it. A YouTube rip of that song adorned every iPod Touch I ever owned. Strange Weekend did me a favor during this never-ending strange weekend - they gave “Rawnald Gregory Erickson the Second” the breath it’s always needed. The hook resonates better with a little less rigidity to it, and a bit of drive behind each of the guitar voices make the back-and-forth dance of the guitar and bass that form the hook sound so much more in-tune with itself. It's incredible to hear what difference a tiny touch of life can make. - David McDevitt

Touch and warmth are things that I have come to value a lot in what I’ve been listening to since the Fire Nation attacked - serving as a best possible replacement to the feeling of sitting as a group of larger than five people sitting on a friend’s floor or bed. Bluish brings forward a bit of all that in “Phase” and it’s incredibly welcoming. It’s words are anxious as we all can be now, but the guitar and hum of vocalist Iris Garrison-Driscoll’s voice bouncing off of the walls show you that it's ok to be in that state of mind. They’re there, - we all are - and it's a nice touch to make things a bit more bearable. - David McDevitt

An early-70’s singer-songwriter aesthetic, lots of reverb, and very direct, wistful lyrics give this tune by Shnayto a sweet, nostalgic flavor. The guitar and vocals, which are the foundation of the song, are so engrossing that even as the band crescendos into earshot and demands attention, it doesn’t shift the listener’s focus. The song feels like a room to sit in, a place to tune out, or a moment to reflect upon. It’s a perfect length but I wish it was longer. - Alex Trzaskowski

This song caught my attention because of how much it reminds me of the expansive, chaotic sound that Women were going for in the early 2010’s, except the vocals are paying homage to Lou Reed rather than Brian Wilson. Hearing “time and time again” sung over the driving beat of this song gives me the raw energy that I listen to songs like “I’m Waiting for the Man” for - it’s so straightforward and infectious, and feels fresh and familiar at the same time. - Alex Trzaskowski

Etai Fuch’s contribution to the project he organized is one of the compilation’s best. “Hole” is a track about doubt, uncertainty, and contemplation of one’s past, and while its subject matter and delivery make it feel uniquely personal, it resonates now more than ever. An excellent folk track in its own right, “Hole” is also a masterwork of songwriting and buildup. Over the track’s runtime Etai layers a multitude of synths and guitars over a solemn acoustic riff, culminating in a distorted explosion of catharsis and relief. We can only hope the crisis we’re in gets a similar ending. - Camden Phalen

Jordana turns an already deeply intimate track further inward on a stark and quietly beautiful cover of Another Michael’s “The Boulder”. Exchanging the original tracks’s layered guitars and warm fuzz for a deep bass synth and 4-chord sequence of bells, Jordana distills “The Boulder” down to its most essential elements. Her instrumental choices leave a once crowded track with vivid emptiness, but her voice fills in the space with power and delicacy. Somehow, her cover sacrifices none of the tracks’s sense of grandeur—  a testament to both her ability as a vocalist and her choices of what to keep. - Camden Phalen

You can listen to and purchase the Pandemic Artist Relief compilation on Bandcamp. Proceeds from the sales of each track go directly to their respective artists, and proceeds from the compilation as a whole benefit the projects' contributors that have suffered significant financial impact from COVID-19.