New albums from Four Tet, The Districts, Dogleg and more 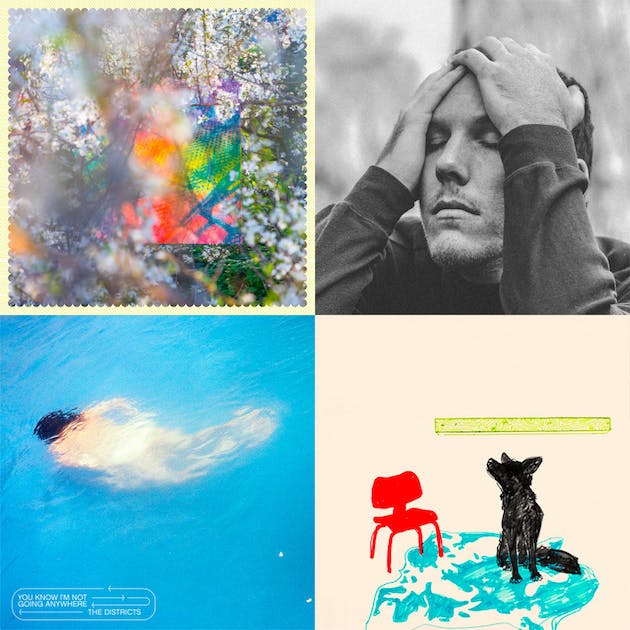 If Conor Oberst had admitted to himself that the seething rage of Desparecidos was in fact a part of him, and allowed for Bright Eyes to be a vessel for both pedal steel and power chords, we would have Bravely. The solo project of Hodera frontman Matthew Smith, on Changing, Bravely does more than just fill the gap in the are they/are they not absence of a full-strength Hodera (thankfully, as of last week, they are!). He builds on his vision for the New Jersey-based project, with staggering vulnerability and endless replay value. Listen on Spotify. -Reid Flynn

The Michigan quartet that is Dogleg is admired by many within the basement emo scene. Their relentless touring schedule has rewarded them with an incredibly dedicated fanbase who, like me, have been eagerly awaiting their full-length debut. And, thankfully, Melee does not disappoint — it’s high-energy power-cord driven anthemic punk. The dynamic eight tracks do a phenomenal job at blending 90’s emo (think Promise Ring) with the sounds of today (think PUP or Title Fight). The band’s mantra is “play fast,” and they certainly stay true to their word, playing fast and playing hard with catchy hooks to boot. Just spend one minute listening to standout track “Fox” and I guarantee you’ll be stagediving in your apartment. Listen on Spotify. -Sarah Masessa

The Districts - You Know I'm Not Going Anywhere

Don’t be mad at me, ‘cause this will be a little controversial (these opinions are my own and not that of my employer, etc etc). But anytime a band is hyped up for being oblique or experimental or you just don’t understand them, we are ignoring the fact that the arguably hardest thing to do in the general expanse of popular music is write an infectious, novel melody — it is the 'hitting a 90mph fastball' of rock & roll — and that by and large, we reward the flavor of the month art kid band for their complexity because they have not prioritized melody (don’t hurt me, art kids, I know that maybe that wasn’t their goal!!). But the thing that has always stuck with me about The Districts is that they have always — since they were teenagers — been untouchably talented at writing melodies that welcomely burrow in your brain as an incessant cry of “Is it easier?!” or images of broken cars and brothers off at war. You Know I’m Not Going Anywhere is more than just a reassuring statement on coping with a changing and scary world, the Philadelphia band’s fourth full-length is jam-packed with superior melodies. The Districts don’t need to hide behind a smokescreen of genre-bending or experimental overdubs, because they have amazing songwriting on their side. Exhibit A: lead single, “Hey Jo.” Tonight, The Districts stand alone. Listen on Spotify. -Reid Flynn

Kieran Hebden just may have given the world precisely the album it needs right now. Sixteen Oceans, his tenth album as Four Tet, is lush, meditative, and full of other-worldly beauty. Like his best work, it divides itself between subdued club bangers and dazzling ambience. Sonically, it comes across as the next logical step from 2017’s New Energy, keeping the downtempo beats and layered strings and chimes, but showing just enough restraint to give it a sense of calm unique to Four Tet’s catalog. It’s a record that will engulf you in its atmosphere, and it comes at a time where being engulfed may be what we need most. Listen on Spotify. -Camden Phalen